CESS AND SURCHARGE- THE DEDUCTIBILITY CONUNDRUM 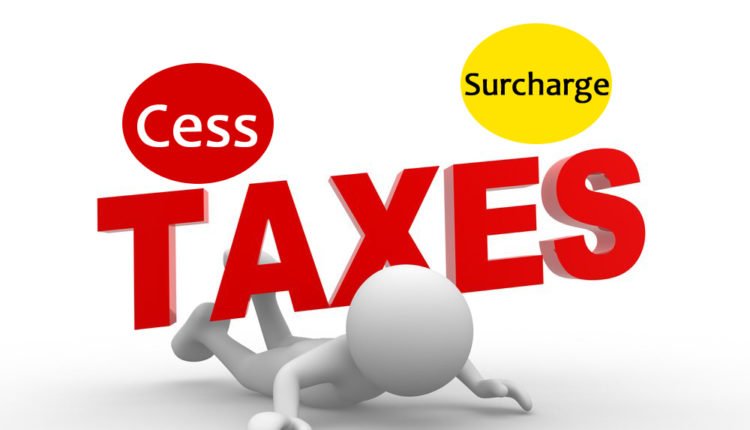 As per section 40(a)(ii) of the Income -tax Act, no deduction shall be allowed while computing deduction under the head “Profits and Gains of Business and Profession” with respect to “any sum paid on account of any rate or tax levied on the profits or gains of any business or profession or assessed at a proportion of, or otherwise on the basis of such profits and gains”.

The past couple of years have seen an increasing trend by the Exchequer to increase revenue collection by levying surcharges and cesses in addition to the regular rates of tax, as approved by the Finance Act every year. Under this process the base tax liability of a taxpayer is increased by a surcharge (at the rates applicable for each category) and the sum so determined is to be further increased by a Cess.  In this context an issue whether there is subtle difference between  “surcharge” and “cess” in terms of their definition and the applicability of Section 40a(ii) of the Income-tax Act, 1961 has acquired prominence in the recent past.

Perceptually and conceptually, the difference between surcharge and cess arises from the purpose for which they are levied, and the ultimate utilization of the revenue generated therefrom.  Surcharge is collected by virtue of the authority granted by the respective Finance Acts and the proceeds therefrom go to the Consolidated Fund of India to be shared with the States in the prescribed manner as any other general tax revenue. Cess, again levied under the authority of the respective Finance Act, is collected for a specific purpose and the funds raised therefrom are utilized for the specific purpose for which they are earmarked. The proceeds of cess may initially go to the Consolidated fund of India, but they have to be utilised only for the stated purpose and cannot be allocated for any other purpose.  In the recent past we have seen instances of “Cess”, being levied for various purposes such as Secondary and Higher Education cess, Swachh Bharat cess, Krishi Kalyan Cess, Infrastructure cess etc.

Further Cess has been defined in Article 270 of the Constitution as a levy for “a specific purpose” and bears the feature of a fee connoting a payment made by an individual for a quid-pro-quo facility/service from the Government.  Article 271 of the Constitution authorises the Parliament to increase duties/taxes by a surcharge for the purpose of the Union.   The above constitutional provisions do suggest a subtle difference between cess and surcharge in the cess that a cess is relatable to a particular service or facility provided by the Government and could be deemed to be in lieu of  services rendered.

Recently the issue relating to the applicability of section 40(a)(ii) of the Act to “cess” has come into focus backed by the argument that it is, basically, not calculated as a tax on the “Profits and Gains of business or profession” but calculated collaterally on the basis of the tax liability originally arrived at and as such does not bear a direct correlation to the income and also because of the conceptual difference between the two highlighted above.  The said argument has also been supported by a reference to a circular, albeit more than half a century old, [ F.No. 91/58/66-ITJ (19) dated 18th May 1967] wherein it has been clarified that when the issue of incorporating section 40(a)(ii) into the Act came up the Select Committee of Parliament, consciously, decided to “omit” cess from the clause.

From the viewpoint of the Department it has been contended that the expression “tax” in s. 40(a)(ii) includes both “surcharge” and “cess” more so because there is no is no separate machinery in the Act for recovery of unpaid cess and imposition of interest and penalty in case of default in payment of unpaid cess. This indicates that cess is a part of tax and all provisions of the Income-tax Act, 1961 apply to “cess” even if the word “cess” is not explicitly mentioned in any of the provisions.

The issue has also seen intense judicial activity in recent times with the High Court of Rajasthan in the case of Chambal Fertiliser and Chemicals Ltd vs Joint Commissioner of Income-Tax, Range – 2, Kota (order dated 31.07.2008 in Income -tax appeal nos 52/2018 and 68/2018) followed by the Bombay High Court in the case of Sesa Goa Ltd vs Joint Commissioner of Income-Tax [(2020) 117 taxmann.com 96 (Bom)] have held that Education Cess and Higher and Secondary Education Cess are liable for deduction in computing income chargeable under the head “Profits and Gains of Business/Profession”.  The said view has also been followed subsequently by different Benches of the Income Tax Appellate Tribunal.

In view of the judicial pronouncements and the circular issued  by the CBDT the  prevailing situation seems to be that cess would not be hit by the mischief of section 40(a)(ii) and can be claimed as a deductible expense and not be added back while calculating the income under the head “Profit and Gains from Business and Profession”.  However, the caveat to be added here is that the issue is potentially litigative and is likely to be contested vehemently by the Income-tax Department whereby finality will arise only when a decision of the Apex Court is available which will have universal application.

Further a practical issue will also arise as to the quantum of cess that can be claimed as a deduction in a case where an Assessee is liable to pay tax under various heads of income  and is liable to pay surcharge as well as  education cess  on the entirety of its income.  In such a case the apportionment of cess vis-à-vis the business income would have to be arrived at on a  systematic and rational basis so as to determine the amount of cess that is directly attributable to the income relatable to ‘business or profession” and not to other heads of income e.g. in  proportion to business income vis-à-vis total income.