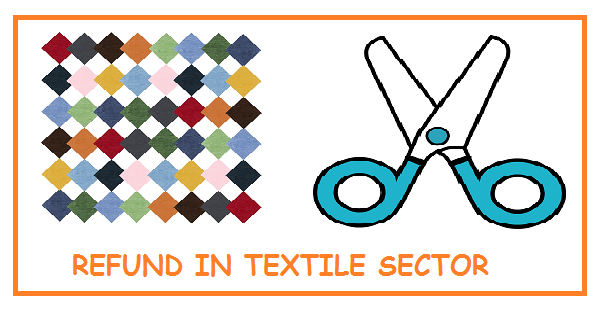 As per section 54(3) of CGST Act, 2017 refund of unutilized ITC shall be available where credit has accumulated on account of the rate of tax of inputs being higher than the rate of tax on output supplies, except the supplies notified by the Government on the recommendation of GST Council. In consonance with section 54(3), Notification No.5/2017 was issued on 28thJun’17 debarring the textile sector from availing refund of the accumulated balance of unutilized ITC. The notification restricted refund on the supply of fabrics only and there was no such restriction on the supply of apparels and textile processing.

On continuous requests of Industry, another notification (Notification No.20/2018) was issued on 26thJul’18 allowing refund to textile sector. While this was something to cheer about, it came with the restriction that accumulated ITC remaining unutilized up to 31stJul’2018 shall lapse. Now, this restriction was in addition to the already existing troubles of the industry.

On one hand, the Apparel Export Promotion Council (AEPC) thanked Union Textiles Minister Smriti Irani for accepting a long pending demand of the textile industry of allowing the refund. However, on the other hand, Southern Gujarat Chamber of Commerce and Industry (SGCCI) urged the Central Government to release the lapsed input tax credit. There were apprehensions that writing off of such ITC balance would result in unbearable loss and a big set back to the industry.

With the objective to settle down the chaos and confusion, a circular was issued on 24thAug’2018.The circular provided clarification on most of the issues but left some open ends which continue to create confusion in the industry.

One view which is also prevalent in the industry is that whether the notification is legally valid or not because when ITC was claimed, all the conditions stipulated u/s 16(1) r.w.s. 16(2) were fulfilled. Therefore, a vested right was created in respect of such ITC and the said right cannot be taken away by the Government. The Act itself contains provisions in various sections for blocking the credit which is otherwise admissible u/s 16. Further, each of the above-mentioned section has a basis for disallowing ITC. The question that emerges is whether the Government can issue such notifications and mention that the credit will lapse as on a particular date?

Although there are a number of precedents with reference to the above matter, it is worthwhile to refer to the judgment in case of Collector Of Central Excise, Pune And Others v. Dai Ichi Karkaria Ltd. And Others wherein the Apex Court held that:

“there is no provision in the Act which provides for a reversal of the credit by the excise authorities except where it has been illegally or irregularly taken, in which event it stands cancelled or, if utilized, has to be paid for. When credit has been validly taken, its benefit is available to the manufacturer without any limitation in time unless the manufacturer itself chooses not to use the raw material in its excisable product. The credit is, therefore, indefeasible. The credit may be taken against the excise duty on a final product manufactured on the very day that it becomes available.”

Now, this issue may be subject to litigation proceedings in various forums that once a substantive right is earned by the company, can the same be withdrawn by a notification. The said notification may be open to judicial scrutiny in near future.

The author is of the opinion that while restoration of refund to the textile industry is a welcome step. But, the notification provides partial relief to the textile industry. The move to bury the unutilized credit pending on 31stJul’ 18 is completely unwarranted and since the Government has already clarified vide its circular, there appears to be no intention of the Government to allow this.

Need of the hour, in order to be out of the disarray that is created, is that the industry should take a step forward and knock the doors of the authorities and demand what is their legitimate right. Some of the possible options can be:-

We at Ashwani & Associates offer a platter of services which includes assisting as an Authorized Representative in filing appeals with the Government Authorities and assisting in the aforesaid options. For a detailed list of services provided by us for GST related services can be accessed here.

For any further details, please reach out to our team on gst@ashwaniassociates.in.